When I talk to someone thinking about starting a business, or who has recently started one, there’s a question nearly everyone asks…

“What are some things I should know?”

My first reaction is usually, “well how much time do you have!?!?” There’s so much to learn it can be overwhelming!

I was recently asked this again and it got me thinking…what would be 10 things I’d want all new small business owners to know? What’s my new standard response?

I challenged myself not to overthink the list and write down the first 10 things I thought of. These are based on my experience in the trenches as a leader in growing small businesses, and as a business owner. Here it is…

This isn’t meant to scare, it’s meant to create a fire. Get profitable and watch your cash flow.

Your business needs to meet your personal goals, not the other way around. Too many times business owners become their business and forget why they started the business in the first place.

Thing #3: Have a vision for your business, that helps feed your personal goals.

In other words, what does your business need to look like for it to be a success and help you achieve what you want to personally.

This will allow you to drill down and create smaller goals throughout the business, helping you have a clear path towards reaching the goals. Without this, you’ll be left questioning if you’re winning or losing and unsure how to change it.

Thing #4: Be aware that your experience and knowledge in your ‘craft’ can be your biggest hurdle to growth if you’re not careful. 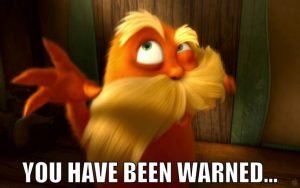 The Lorax has warned you. You need to enter this with the mindset that while you might start out as the one doing much of the work, your goal is to be the CEO of your business. Do the work until you have the demand to hire someone else into a well-defined role with repeatable systems & processes. (Assuming you’re not a funded company.)

Think of your company as a ladder – your goal is to install systems and processes at each rung starting from the bottom and work your way up. Here’s an article we wrote on this topic.

Speaking of systems and processes, it’s more important you have a process in place than it is the process being ‘automated’. Don’t read this is, ‘don’t automate’ – that’s not it at all.

We love automation but don’t get hung up on automating out of the gate. Build the steps which produce the desired result, then focus on automating to gain efficiency. I’ve seen businesses not do the things they need to be doing because it would require a manual effort. Success requires effort.

Thing #6: Spend time on your people. Lots of it.

It’s hard to spend too much time recruiting, hiring, training and developing your team.

I debated removing this after first typing it because I’ve seen cases where it makes sense, and is necessary, to pause and fix some more serious issues. However, I’m leaving it because that’s the exception.

Think of your sales pipeline as a garden hose – when you turn off the spigot, it takes time to see the water stop flowing out the other end.

The same is true when you turn the spigot on again.

You won’t think about turning it on again until you need it and by that time it’s too late…you’ll be watching the end of the hose wondering why the water isn’t flowing as soon as you turn it on.

Instead of shutting it down, figure out why you felt the need to turn it off and fix that (pricing is too low, onboarding is too slow, not enough capacity to deliver, etc.)

Thing #8: Being new doesn’t mean you should charge less.

Don’t underprice (undervalue) your business because you are new.

When you calculate pricing, it needs to cover 4 things:
1. your direct costs to produce your sales
2. your fixed expenses (payroll, marketing, overhead)
3. your capital expenditures required to operate
4. your profit

I’ve seen too many times where all 4 are not considered in determining pricing.

Especially early on, understand the breakeven formula. Here it is: 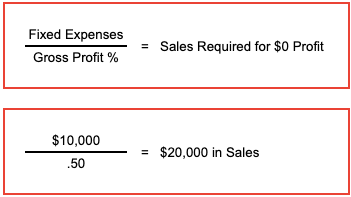 Run it a second time but add your monthly desired profit to your fixed expense number. This will help you with two things:
1. Every time you think about spending more money on fixed expenses, ask yourself if that new expense can at least breakeven. If not, question why you’re spending the money.
2. It will show you the importance of gross profit margin. (Add 5% and re-run the math.)

I know Mark Cuban says “sales cures all” but his point is more relevant to getting started – it’s true, you need sales to have a business.

However, more sales doesn’t always fix everything. Selling more at poor margins is bad. Scaling inefficiency is bad. Sometimes you need to fix things that are broken before stomping the gas pedal.

Knowing this will reduce the time you spend banging your head into a wall wondering how to grow revenue. Those 5 ways are how. Click here for a more information on this topic.

Bonus: Talk to your customers.

Ok, I couldn’t trim this to 10 and didn’t want to combine 2 of them, so this is a bonus for sticking around.

Talk to your customers.

Don’t assume you know why they buy, ask them.

Don’t assume why they referred you to a peer, ask them.

Don’t assume you know why they left and started using a competitor, ask them.

Also, appreciate, and show appreciation for, this infomation they are willing to share.

The list could certainly be made longer so if you have questions or would be interested in more information on any of the topics addressed here, use the comment box and let us know!

Click to sign-up to receive all future articles about growing
a more profitable and thriving small business, with less stress and overwhelm!